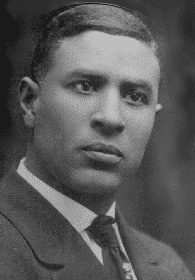 Garrett Augustus Morgan, the son of formerly enslaved Africans, was born in Paris, Kentucky. He was an inventor whose curiosity and innovation led him to develop several commercial products, many of which are still in use today.

Morgan is probably best known for inventing the gas mask and the traffic light. With only an elementary education Morgan as a teenager left Kentucky to Cincinnati, Ohio in search of employment. When he was 37, Morgan invented the gas mask, which was patented in 1914, and was used by the United States Army during World War I.

In 1920, he started the Cleveland Call newspaper. Morgan became a successful and widely respected businessman. This prosperity enabled him to purchase a home and an automobile. Morgan’s experiences driving through the streets of Cleveland are what led him to invent the nation’s first patented three-position traffic signal.

Morgan later had the technology patented in Great Britain and Canada. This technology was the basis for the modern-day traffic signal and was a significant contribution to the development of what we now know as Intelligent Transportation Systems. Morgan’s original wooden prototype traffic signal is on public display at Cleveland’s African American Museum along with one of the three original Safety Hoods still in existence.